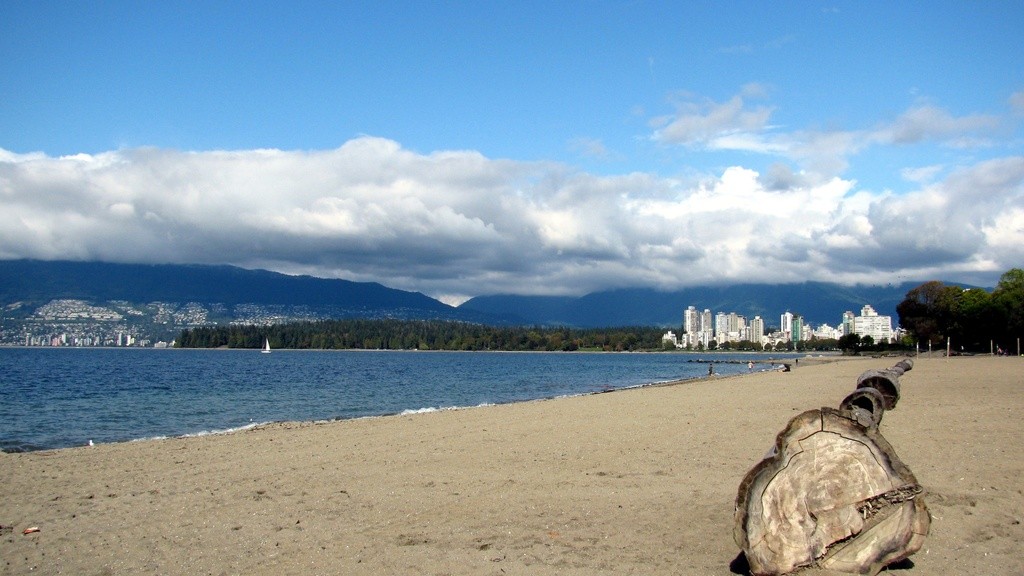 Vancouver is British Columbia’s most populous city, and is one of the most ethnically diverse cities in Canada. This coastal seaport is located on the westernmost side of the country, and is widely regarded as one of the top cities worldwide for quality of life. Considering Vancouver’s stunning surroundings of ocean, islands, lakes, rivers, and mountains, this should come as no surprise.

To Vancouver’s north is the Burrard Inlet, to its east is Burnaby Lake Regional Park, to its south is the Fraser River, to its west is the Strait of Georgia, Vancouver Island, and the Pacific Ocean. From the city, you can look north towards the North Shore Mountains, or southeast to Mount Baker on a clear day.

Vancouver’s coastal beaches tend to be sandy, rocky, or gravelly, and feature old growth forests, tall evergreen trees, and logs along the shoreline. Inland, you will find rivers and lakes with sandy beaches and swimming holes with grassy banks set against a panoramic backdrop of scenic mountains and even waterfalls. Across the Strait of Georgia on Vancouver Island’s eastern shores, sandy or rocky tidal beaches dominate the landscape.

Many popular beaches are accessible by transit, and many beaches also have free or paid parking and washrooms nearby. Lifeguards are present from Victoria Day to Labour day from 11:30 am to 8:30 pm.

Vancouver Coastal Health monitors the water quality of 31 beaches in the Vancouver area. Sampling occurs from May to September, and then again in December for the city’s annual Polar Bear Swim. Data is posted on Swim Guide, and is usually available on Thursdays or Fridays.

Fraser Riverkeeper is an initiative of Swim Drink Fish that operates a year-round water monitoring hub in Vancouver's False Creek. Recreational water quality samples are collected weekly from April to October and biweekly from November to March on a yearly basis. Samples are collected from three locations in False Creek: Olympic Village, Brokers' Bay, and Vanier Park, and analyzed using an in-house IDEXX microbiology laboratory. Fraser Riverkeeper recognizes that people are recreating in Vancouver's waters year-round due to its temperate winters and is committed to providing citizens with reliable and accurate water quality data 12 months of the year.

Water Sports and Activities in Vancouver

Popular activities on the coast include sailing, windsurfing, kayaking, swimming, and exploring tidal pools. Vancouver’s waters have become a surprising destination for scuba divers as well. Here, you may see wolf eels, Pacific octopuses, or shipwrecks. You can also spot wildlife, such as sea lions sunbathing at Whytecliff Park or the resident seal at Sandy Cove.

Jericho Beach is one of Vancouver’s most popular beaches for swimmers, sailors, and windsurfers. The beach features tennis courts, playing fields, and a swimming raft as well. Just to the east is Kitsilano Beach, which is adored for its oceanside, heated, saltwater pool, swimming raft, and windsurfing, skimboarding, and stand up paddleboarding lessons.

This city has a number of fantastic beaches, often right beside each other. Vancouver’s Seaside Greenway stretches a whopping 28 kilometers along the city’s shore, making it the longest uninterrupted waterfront path in the world, and a great place to hop on your bike and go beach-hopping. Make sure you check out English Bay along Stanley Park's seawall system.