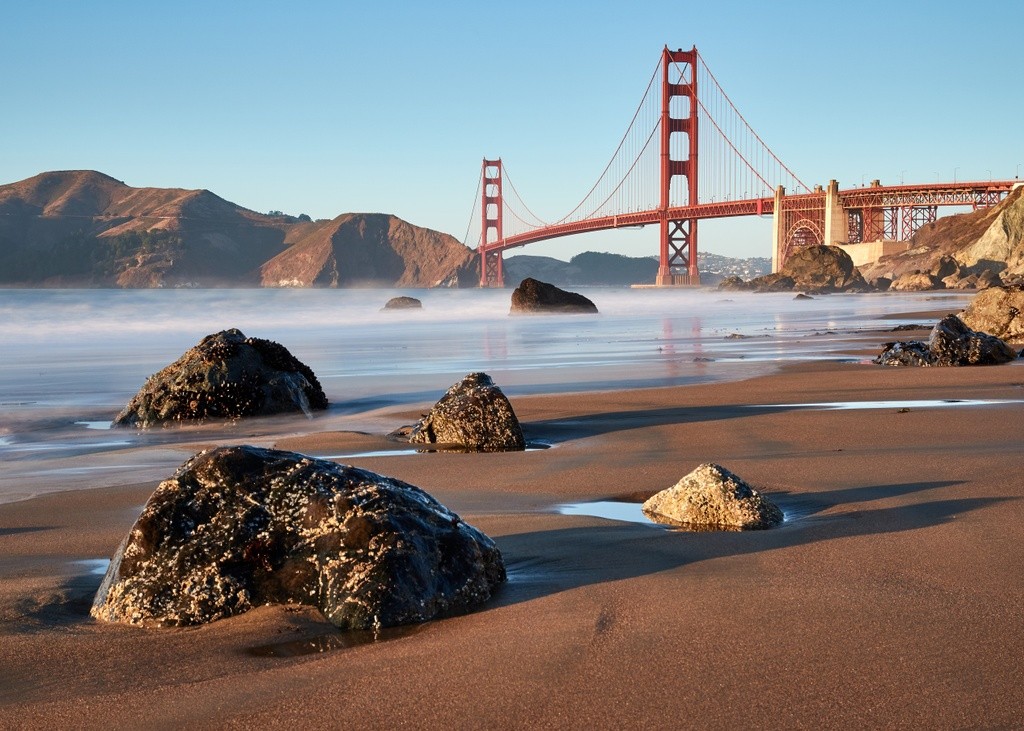 Also known as ‘SF’ or ‘San Fran’, this beautiful and exciting city in California is known for its fog, rolling hills, mild year-round climate, lively waterfront, and of course, the iconic Golden Gate Bridge. This world-famous structure stretches across the glimmering waters of the Golden Gate Strait that joins the Pacific with San Francisco Bay.

Situated on the west coast of the United States at the San Francisco Peninsula’s northern end, this city is embraced by the San Francisco Bay and the Pacific Ocean. Despite being a large urban centre, San Francisco has plenty of parks, hiking trails, and greenspace to explore. Perhaps the most notable feature of the city’s terrain is its many hills. There are more than 50 hills in the city’s limits.

On San Francisco’s spectacular coast, you’ll find lots of sandy and rocky beaches to explore, and you may spot wildlife like birds, or the resident protected sea lions at Pier 39. Stunning islands dot the shore of San Francisco, such as Treasure Island, which has sandy and rocky beaches. Inland, discover cool, refreshing rivers nearby with sandy beaches and tree-lined shores.

San Francisco Shoreline Beach Monitoring Program monitors water quality in the city. This program is a cooperative effort between Public Health Utilities Commission and the San Francisco Department of Public Health. Swimming spots are monitored year-round and are sampled on a weekly basis. When combined sewer system overflows happen, signs are posted on beaches. The signs stay up until the discharge stops and bacteria levels drop below the necessary standards.

Visit China Beach if you’d like to go surfing, boardsailing, or surf fishing. Swimming is not recommended here due to strong currents and cold water. If you do want to go for a dip, Ocean Beach is often considered San Francisco’s most popular, with people flocking to it for swimming, surfing, kayaking, and surf fishing. For a beach with a great view of the Golden Great Bridge, head to Baker Beach, where both locals and tourists enjoy sunbathing and fishing.

San Francisco has mostly wet, mild winters and dry summers, and an exceptionally mild climate year-round. Temperatures do not vary much between seasons, though June, July, and August, are cooler in the city than they are in most major states in the U.S. this time of year. This city is often the warmest In August and September, with temperatures averaging 23 °C (73 °F).

With so much shoreline and so many places to enjoy the waters of the Pacific coast, San Francisco is a must-visit destination for water-lovers.