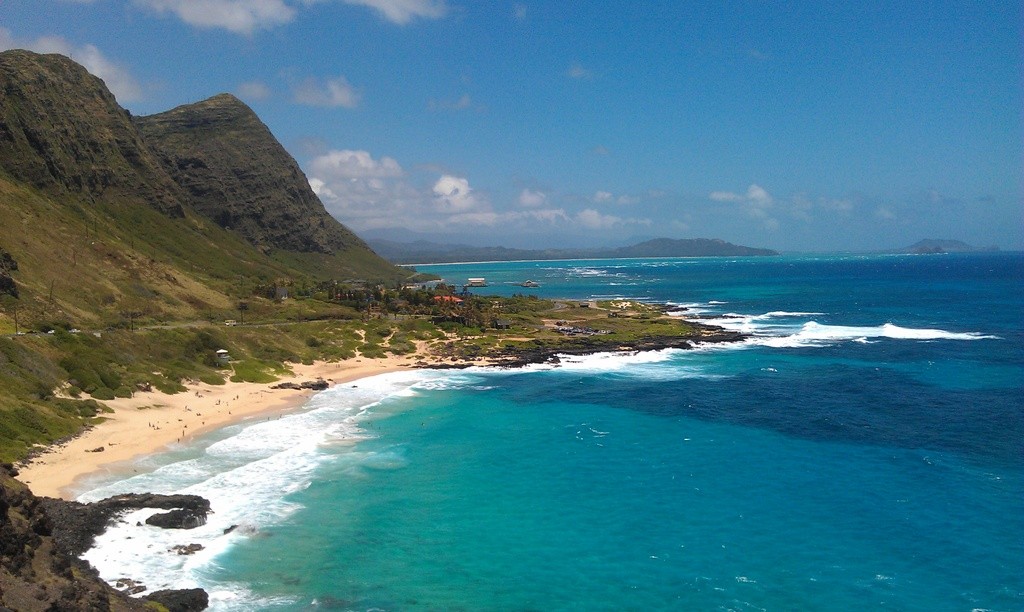 Beaches are more than a destination in Hawaii; they are a way of life. Hawaii is famous the world over for its warm waters, stunning vistas, and oceanic surroundings. Formed by volcanic activity, the 8 islands that comprise Hawaii boast a wide variety of beaches, with everything from calm beaches for lounging and swimming to beaches with large swells and world class surf. Hawaiian beaches also come in a range of colours including black sand created by eroded volcanic lava, green sand coloured by the mineral olivine, red sand from surrounding hills, and a rainbow beach made of sea glass sand.

Hawaii is located 3200 km (2000 mi) off the western coast of the United States in the Pacific Ocean and is the country’s 8th smallest state. While several US territories like Puerto Rico and Guam are islands, Hawaii is the only island state, giving it the 4th longest coastline after Alaska, Florida, and California. Another feature of Hawaii is the climate. It is mostly a typical tropical climate, but with less extreme heat and humidity.

Hawaii is also home to the Papahanaumokuakea Marine National Monument, a 360,000 km2 (140,000 mi) protected marine environment of atolls, reefs, and deep sea. This area is bigger than all other United States’ National Parks combined.

As with any place with so much coast, the range of recreational water activities are endless. Swimming, kayaking, and kiteboarding are all popular activities in Hawaii. Hawaii also has 85% of all the coral reefs in the United States, making it an ideal destination for snorkeling and scuba diving. Like much of the world, however, the reefs in Hawaii are under threat and must be treated with respect at all times. Reefs are a fragile ecosystem and should never been touched or removed from the ocean. The sunscreen you use can also negatively impact coral, so be sure to chose one that is free of oxybenzone.

Perhaps more than any other recreational water activity Hawaii is famous for surfing. Surfing has been deeply intertwined with Indigenous Hawaiian culture for thousands of years, long before European contact. Rather than a sport, Indigenous Hawaiian culture treats surfing as an art form, and with great reverence. After a revitalization and popularization at the turn of the 19th century, surfing has become synonymous with Hawaiian culture more broadly. Hawaii features beaches and surfs perfect for everyone from the beginner to the seasoned pro.
Page 1 / 3
Previous Page
Next Page
Page 1 / 3
Previous Page
Next Page
Swim Guide
is supported by