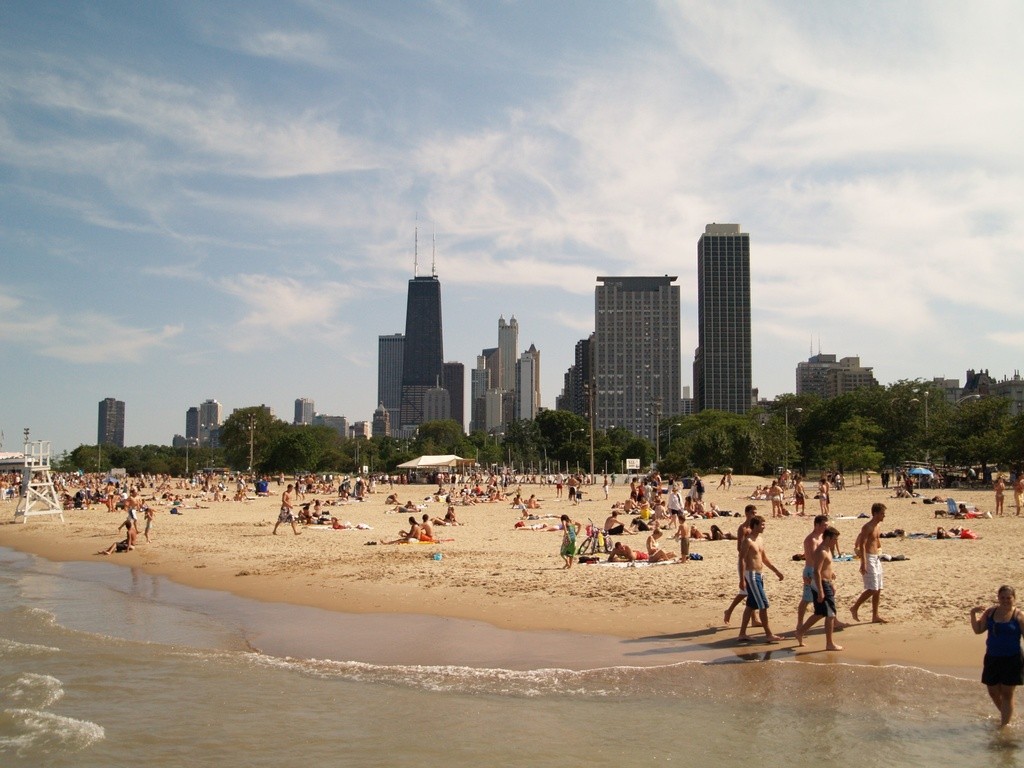 Chicago is called the ‘Windy City’, but ‘Water City’ would be an equally appropriate nickname. Chicago lies in the northeastern part of Illinois, positioned both in the American Midwest as well as in the Great Lakes region. Lake Michigan, the only Great Lake that is fully located in the States, meets Chicago on its east with shimmering waters and sandy shoreline.

Chicago sits on the Chicago Portage, joining the Mississippi River watershed with the Great Lakes watershed. The Chicago and Calumet Rivers flow through the city, like a Venice whose rivers are lined with skyscrapers.

The Chicago River’s water quality has been an ongoing issue throughout the city’s history due to generations of industrial production. In 1885, a violent storm caused the Chicago River to release enormous quantities of water polluted with sewage into Lake Michigan. In response, the city turned the flow of the river around, away from the lake. Despite this reversal, Chicago’s combined sewage system still causes problems for the city’s water quality.

However, efforts are underway to make the river swimmable by 2030. In fact, Chicago already has one of the most advanced beach monitoring programs in the world.

The Chicago Park District monitors beach water quality daily from the end of May to Labour Day. In Illinois, recreational public beaches are tested a minimum of once a week, usually from May to September. In the heavily frequented beaches in Chicago, water may be tested five times a week or in some cases, daily. Chicago uses rapid testing methods and predictive models to provide water quality information to the public in record time. In addition, water quality data for Chicago beaches is available and open for everyone to read and use.

Water Sports and Activities in Chicago

Chicago is a great place for urban swimming and water recreation. Many beaches are supervised by lifeguards during the beach season and long distance swimming parallel to the city’s shore is an excellent way to take in the city’s impressive skyline. Kayaking, kitesurfing, lake surfing, pedal boating, river boating, sailing, cruising, and yachting are popular in Lake Michigan and Chicago’s rivers. Salmon, whitefish, smelt, lake trout, and walleye inhabit these waters, and fishers will likely have a lot of luck here.

You don’t have to just be in the water to enjoy Chicago’s waterfront. The city’s shoreline features many areas for sports, like baseball, basketball, handball, soccer, beach volleyball, and tennis. The paths that run along Chicago’s waterfront are the perfect place to bike, rollerblade, walk, or run while you take in the beauty of Lake Michigan. In addition to its stunning lakefront, Chicago is home to a number of exciting waterfront attractions such as Navy Pier, Lincoln Park Zoo, and the Chicago History Museum.

Hot and humid summers with numerous heat waves make Chicago’s beaches fantastic places to beat the heat with a refreshing dip in the lake. In July, the daily average temperature is 24 °C (76 °F), and during an average summer in Chicago, temperatures can be as high as 32-38 °C (90-100 °F).

North Avenue Beach is one of Chicago’s most celebrated beaches, and one trip to this sandy city paradise will show you why. Here, you can rent a bike, wakeboard, paddleboard, kayak, or volleyball court, do some long distance swimming, and grab a bite to eat at one of the food concessions after you’ve worked up an appetite. Before you leave, check out the beach’s unique boat-shaped beach house which offers some of the best views in the city.